So many humans today are feeling pervasive overwhelm and anxiety about who they think they should be and how they should be spending their time on earth.

In my experience both as a psychotherapist and consciousness/spiritual growth teacher I know it helps to learn about real life experiences where growing in conscious awareness and wellbeing is concerned.  In particular it helps to see what others have done to move through the heavy encumbrances that occur simply by living in the world today.

All of my readers are at baseline highly sensitive humans which is a broadly accepted classification for those who perceive, feel and have deep awareness of themselves, others and the world in which they live. Some of you have awarenesses beyond this world. Many more of you are healing artists or otherwise spiritually oriented expressives. You have exquisite perception and depth of feeling. 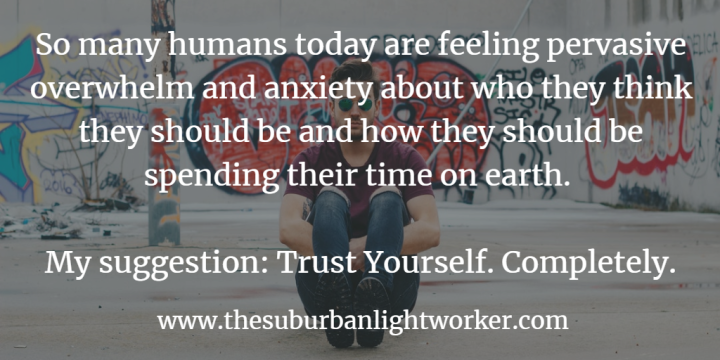 It is not a surprise to you that the human experience is often pain-filled  with accumulated unconscious themes and programs playing out across many lifetimes here on earth. As such I thought you may appreciate a brief exchange between a new colleague of mine in response to something she posted to which I replied.

The following interaction is about my own shedding of the heavy (industrialized nation) programming that says we should pursue ‘having it all’ with little regard for our personal, family, community and planetary health and wellbeing.

Janna: This morning I awoke wanting to ask you this: do you recall when the shedding “transition” began for you? For me, I would say it started slowly in December 2007, picking up momentum here and there, and now, full integration. Thank you for your wisdom!!

Me: Well the messaging was more cultural versus familial for me. Plus I had a sense of inner personal pressure due to things I wanted to exceed from my family experiences. I pushed myself (and did for years) plus had a healthy dose of southern-woman-people- pleasing going on.

It took to my mid thirties to really begin to understand what was me and what was not me (mine). Many of us who read this are highly sensitive humans and have similar patterns. Therapy yes! Yoga yes! Fitness yes! Letting go of relationships that did not sustain me came in my later 30’s early 40’s. I’m also a psychotherapist & consciousness teacher (as I awoke to my intuitive and clair-senses abilities) so I’ve been devoted to self awareness and healing self and others most of my adult life. I’m 52 now.

As I let go of people, places and career constructs that did not support my whole self, more of the real me emerged. I began falling in love with myself and all existence heavily over the last 5 years in particular. Thanks for asking.

Shedding programming is as unique to your energy framework as is your fingerprint but once you catch on to it, the drive to do so begins to naturally takeover to a large extent. Your job then begins to feed your soul and let the rest take care of itself. Get support, find your tribe and fall in love with your incarnation this lifetime. ❤️

Always with my love, Amber

2 thoughts on “On Shedding Programming: It Takes Time”